You can order sweets here.


"We all know, if there ever was a 'food god', it would be Anthony Bourdain" -Alton Brown 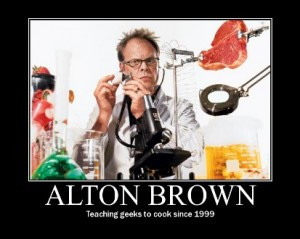 For years, I have watched Alton Brown's Good Eats and he has always had a special place in my heart.
I began cooking from my heart.
Until I met #AltonBae, I always just cooked from experience and passion. But he showed me how science can help my general know how. I would think a pie crust was good because I made it with love. (It helps but it was probably my fat to flour ratio...)

In any case, whenever I had a question or needed more info or insight on what works best in the kitchen, Alton Brown was the way to go. He taught me why to use Star Anise for apple dishes instead of cinnamon. He showed me how yeast works.

Alton Brown is my Everything. 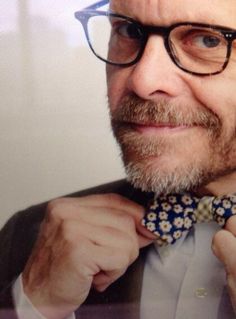 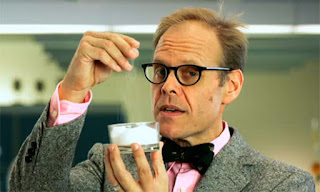 I took #TonyBae to see Alton's one man food show,Alton Brown LIVE: Eat YourScience. Tony had all his Good Eats Cookbooks and has always wanted to just be in the room with him. I found the shiw, funny enough, on a Facebook sponsored advertisement. I guess posting about food has its benefits ;3

If we were going to see Alton, I wanted to show him my love for food. And what better way to do that than a Rilakkuma Apron!  Angel Tenshi from Chocolate Covered Cosplay gifted me this kawaii apron a while back and what place would be better to debut it that at an Alton Brown show! 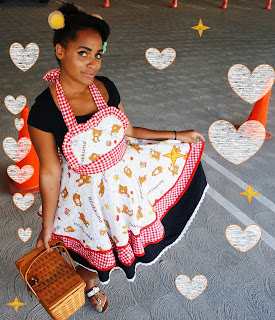 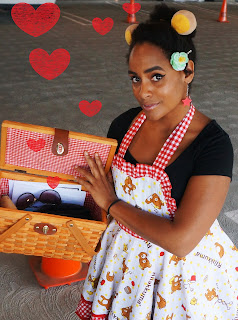 Now, Since the tour isn't done, I won't spoil too much ;)

What I CAN say is that the performance was a well oiled machine, full of live music, props, food, theatre, science and cooking.
In his Alton way, he taught us so much with a beautiful sense of humor and a bountiful mind full of delicious knowledge.  With a dash of mixology!

At first, #TonyBae and I were fine with our seats. I did the best with what I could afford at the time, and got us balcony seats. As you can see, we're far up and also ready to Rock! 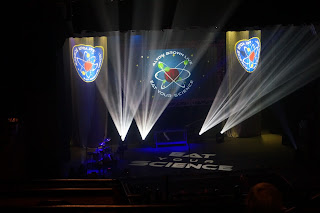 Then came the blessing of an evening! Alton's Stage Manager came up to us and offered us tickets on the floor, closer to the stage. What? Excuse ME?! Did my outfit work? DID SENPAI NOTICE ME?!?!

Well, as we got up another pair of foodies asked if
they could have our seats. We relinquished our seats for a new territory.
We asked the usher where the ticket lead us and she happily directed us to the first floor. This is our view from our NEW seats! 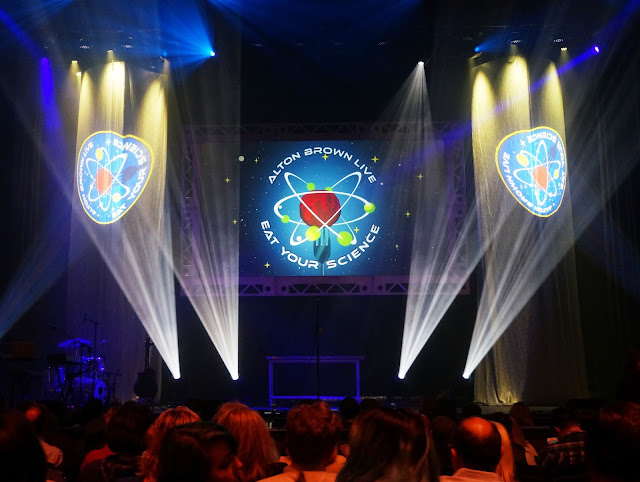 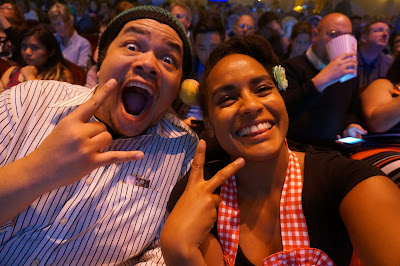 The show opened with a live video feed of Alton in his dressing room following him to the stage. He greeted us and we welcomed him with open arms.
He had a band on stage, who played some groovy tunes, and also created hilarity. Then Alton wanted to share a tweet.

"@AltonBrown do you consider yourself a food god?"

He bashfully declines and admits we all could agree that it'd be Anthony Bourdain. However, through reluctance and a dream, Alton dons the ceremonial robes and spoon shaped staff. A Rod of Deliciousness, you might say. 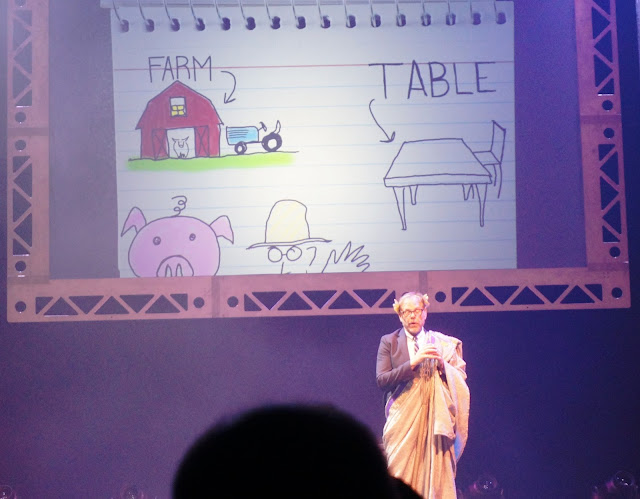 He declared, if he was food god, he'd have some rules to enact ASAP. (You're not getting them all, so simmer down, go see the show)

Oh my gosh. Yaaass. Imagine, a world of Adults who don't live on chicken nuggets and burgers, but a balanced diet of delicious complex flavors. Not only do children's menus limit the culinary and culture experience of the child, it isn't always healthy or diverse. But most importantly, the children's menu also give your kid a choice.

Now, when you were growing up, 6-9 yrs old, did you get to choose dinner? Not in my parent's house. You ate what was put in front of you. We had well balanced meals (please for the love of the food god, do this cause it taught me healthy habits), even we didn't have much. And there were absolutely no complaints. Eat it or starve.

Alton noted that by giving a child a choice when it isn't usually given creates a flooding of emotions and contradictions. Do I get what mommy wants, do I get what I want, what do I want? The kid is blown away by the fact that they get to pick and becomes a long discussion and decision making process. And in the end, it's gonna be pizza, mac n cheese, chicken fingers, fish sticks, or french fries...Or of you're lucky, an apple. The End. How do we develop healthy eating habits? Or diverse palates and taste? Or how do we get people to embrace unknown food?

"The result is Adults who only eat, well,  chicken fingers.."-Alton Brown

I have had friends who have never had asparagus. ASPARAGUS. Or just "hate"  broccoli. It broke my heart. It makes me wonder, where did you have that broccoli? Who cooked it for you? Who did this to you?
~~~

Alton lays out a new commandment,

End World Hunger by Making All Rats Taste Like Bacon.

Everyone cheers.
Well, Just about everyone...
There were a few too quiet...
Alton: "Who here loves bacon?"
Most Hands raise. Alton noticed the "most".
"Who doesn't like bacon"
A silence came over the theatre. No hands go up. Then, in the way only Alton could say,
"It's okay, really. It's just, some of your hands weren't up. So either you like bacon or your don't, don't be worried, we aren't going to judge you"
A  young woman  raises her hand. Alton walks over to her and asks her to stands up.
She stands and Alton talks to her like he is helping a wounded wolf. With respect and care.
"Please, tell us, why don't you like bacon. ? "


"It's the texture, "
"What about the texture? Too crunchy , too soft?"
"I dunno, I took a bite  and it was soft and gristle-ly . I just didnt like it"
"How old where you?"
"I was six"
Alton curses the children menu with a side eye to us, then asks,
"where did you get this bacon"
"Denny's"
And the crowd goes WILD with understanding groans! Alton calms us down and has the 'AH-Ha!' Moment were all thinking,
"My dear, you don't hate Bacon, You hate Denny's! "
#dead #nochill
"Listen, Are you with that guy next to you?"
"Yes, he's my boyfriend. He likes bacon"
"Good, cause after the show, He's gonna take you to get some center cut bacon, and help you fry that up. Okay?  "
The Boyfriend nods. The crowd dies with laughter.

And I agree. Seriously. I always ask people who claim to HATE a food, Why? Where did you have it? Who made it for you? I just think most people "hate" a food cause they never had it good. ( I mean there is a difference between a polish kielbasa sausage from 7-11 and a polish kielbasa from a homemade brat house like Wurstkuche in DtLa.) I then offer to make it for them. In hopes it will change their mind. And its worked before too!

During intermission, we met a lovely guy outside who said to just call him Picnic.
Apparently he was sitting right in front of us. When we sat down, we waved and his friends sat down as well .
It so happened to be Jet Tila from Cutthroat kitchen and his wife. She had a churro. Churros have a special place in my lifestyle. So I said, against my will, "mmmm churros"
She heard me and replied "I know, I love them so much."
"Yes queen, I feel you. I once double-fisted churros in a wave pool"
She turned to her hubby and declared "she is my hero"

The Lights went down for Act 2. DeVo.(No Spoilers) 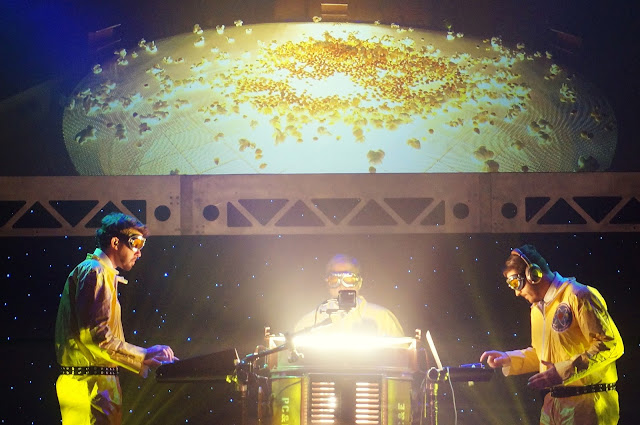 But I will leave you with this. At the end, Alton shared his feelings for an important but tedious part of cooking through song.
I give you,
Mise en Place. 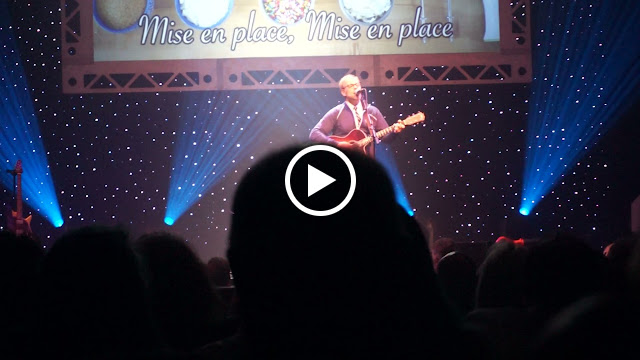 After the show, we took a photo with Jet, his Lady, and Picnic. They were super sweet and gracious. 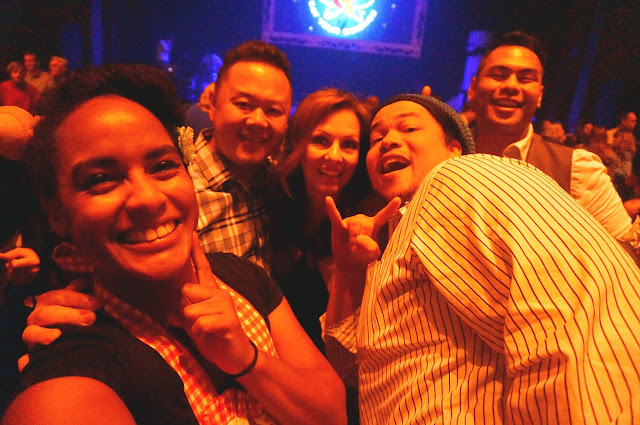 We said are goodbyes and we bid he farewell to the theatre.

What a day filled with joy and blessings!

As the street lights burned bright with wonder, Bae and I strolled into the night, arm in arm, looking for...

Posted by Unknown at 6:58 PM No comments:

My Journey as a Cosplay Chef

Making ALL the dishes from Shokugeki no Soma.